We have written previously in this blog of GWD’s connections with holders of The Royal Warrant, notably Cornelia James. Recently, we were contacted by Taylor’s Bulbs of Holbeach, who hold The Royal Warrant as Bulb Growers to Her Majesty The Queen and have won the distinguished Gold Medal at the RHS Chelsea Flower Show for 23 years consecutively. The owner of Taylor’s Bulbs, Lord John Taylor, Baron of Holbeach CBE PC FRSA, is currently also Government Chief Whip in the House of Lords.

Taylors had bred a new bulb called ‘Gentlemen at Arms’ which was to be presented in person by Lord Taylor to Her Majesty at a Royal garden party at Windsor Castle in May 2016, on the occasion of the Queen’s 90th Birthday celebrations. The company wanted a bespoke, one-off presentation packaging solution to display the bulbs in the best possible way and approached GWD Ltd to create it. 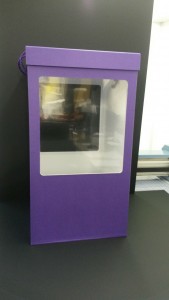 The box in our factory

The deadline was quite tight (four days from start to finish!) and the quality was to be of the highest standard so there was some pressure with the job. At GWD however, we have been creating bespoke packaging projects for over 30 years, so we have the experience and the team members to carry it off. The box itself was 700mm tall in deep purple with two central ‘windows’ die-cut into it to display the bulbs. It had a top lid and cords (also in deep purple) so Lord Taylor could carry it when presenting the flowers to HRH The Queen (who, no doubt, received it whilst wearing her Cornelia James gloves!) 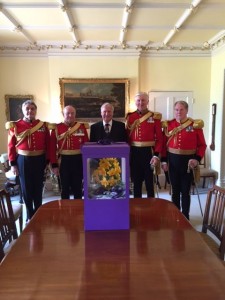 The overall effect, especially with the marvellous blooms included was, in Lord John’s words ‘Magnificent’. Helen Chambers, Key Account Manager at Taylor’s Bulbs said: “He (Lord John) was delighted with the whole look…the flowers fitted perfectly through the window section.” She added: “Many Thanks to you and all your team for making this a successful project and in such a small space of time, we appreciate the speed and attention to detail given.”

We can’t be sure of Her Majesty’s reaction we like to imagine that she was quite impressed too:-) 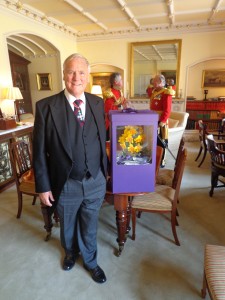 The Baron of Holbeach